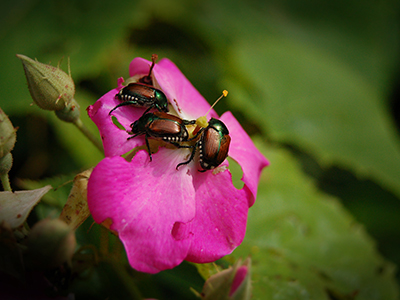 On September 18, 2015, a male and female Japanese Beetle (JB) were trapped in the City of Sunnyvale. Japanese Beetles are a very destructive plant pest and can be very difficult to supply, and a lack of natural enemies in the United States has created the ideal environment for the spread of this destructive insect on the east coast. The primary feeding source for the grubs is turf and they will devour grass roots causing large dead patches of lawn. The adults emerge around May and control since the majority of their life is spent underground. A favorable climate, an abundant food June and live for about 2 months in the adult form. The adults will attack the foliage, flowers, and fruit of more than 300 different ornamental and agricultural plants.

According to USDA’s website, Japanese beetles were first found in the United States in 1916 near Riverton, New Jersey. Since then, Japanese beetles have spread throughout most states east of the Mississippi River. However, partial infestations also occur west of the Mississippi River in states such as Arkansas, Iowa, Kansas, Minnesota, Missouri, and Oklahoma. JB has now completely colonized 20 states and partially colonized 15 others. JB is NOT found in California and the California Department of Agriculture places thousands of traps across the State monitoring for this pest. When it’s found, it is quickly eradicated to keep it from becoming established in this State. This pest is very destructive to both the agricultural industry and to urban landscapes.  The Japanese beetle is the most widespread turf-grass pest in the United States and loses attributed to JB damage are estimated at $234 million a year.

The unique coloration of the adult Japanese Beetles makes them stand out from other native beetles found in California. Adult JB are about a half inch in length and the have a shiny metallic green body with bronze colored wings. They can be further identified by six small tufts of white hair along its sides and back of body. Adults will emerge during late spring and early summer.

What is the State doing about this infestation?

No JB life stages were detected in 2017 and the treatment project has ended. Currently California Department of Agriculture is reverting to 2 traps per square mile, the standard detection levels.

What can you do to help?

Japanese Beetles can be carried into California on plants and in soil. Please do not accept any plants with roots and soil from an uncertified source. The best way JB hitchhike into California is by hiding in soil with a plant. Never accept plants with soil from the east coast unless the nursery tells you they are certified JB free!

You can also help out by saying “yes” to a trap in your yard if the State Department of Food & Agriculture asks to hang one on your property. It’s due to the great cooperation of residents in the Sunnyvale area that we were able to detect this invasive pest early and control it before it spread!​​